When a private company offers additional shares for sale at a lower price than the price sold in the previous financing round, that offering is known as a “down round.” Stated differently, a fundraising round is said to be a “down round” when the company’s pre-money valuation in the round is lower than the post-money valuation of the previous round.

Consequences of Having a Down Round

Private companies raise capital through rounds of funding, with the usual expectation being that, as the value of the company grows, the stock sold in each round will be issued at progressively higher prices to reflect the company’s growth. However, adverse market developments, failures to meet technical benchmarks, and other business challenges may result in deflated outlook, which in turn may induce later investors to insist on a lower price per share.

Down rounds are generally viewed by the market as a negative signal that the company has poor prospects and may have previously been overvalued. This perception may damage trust and confidence in the company’s prospects, dampen employee morale, and hinder future investment. For these reasons, you should (1) carefully consider alternatives to a down round, and (2) take certain precautionary measures. See the “Alternatives to a Down Round” and “Recommendations for Raising a Down Round” subsections below.

As is the case with all additional rounds of financing, a down round will dilute the existing investors’ ownership percentages. However, as illustrated in Figures 1 through 4 below, the dilutive effect of a down round is greater than an “up round” or a “flat round” due to the lower share prices and the correspondingly greater number of shares being issued. In addition, any anti-dilution protections in the company’s current preferred stock can magnify the dilution of founders’ common stock, which typically lacks such protections.

Figure 1 shows the state of a hypothetical company after its Series A financing. 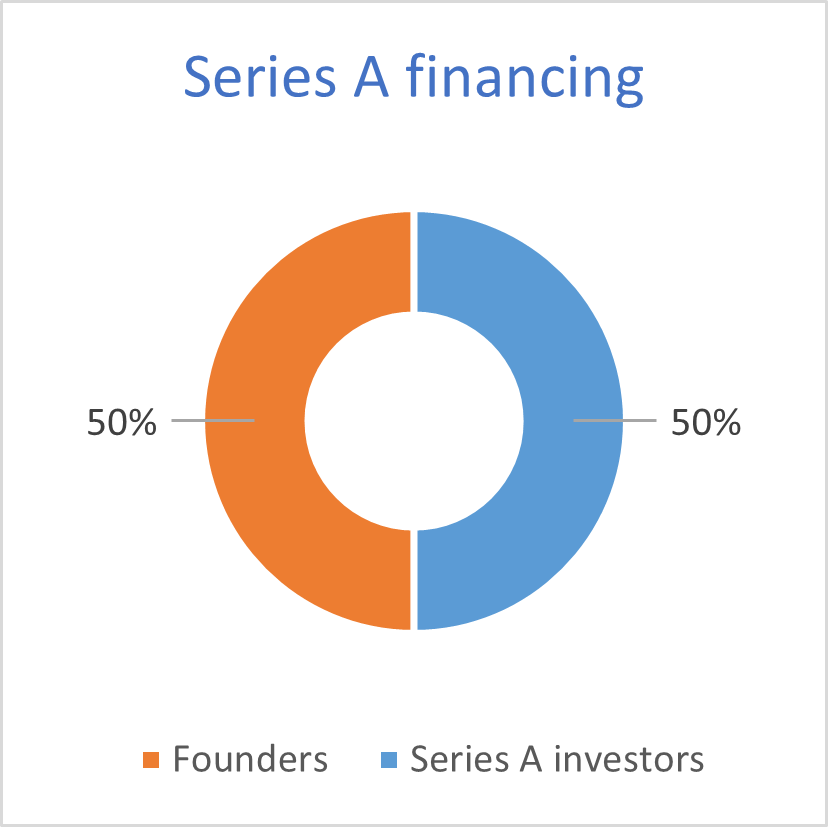 Figure 2 illustrates a $5,000,000 Series B “up round”, with some dilution to the existing holders of Series A and common stock. 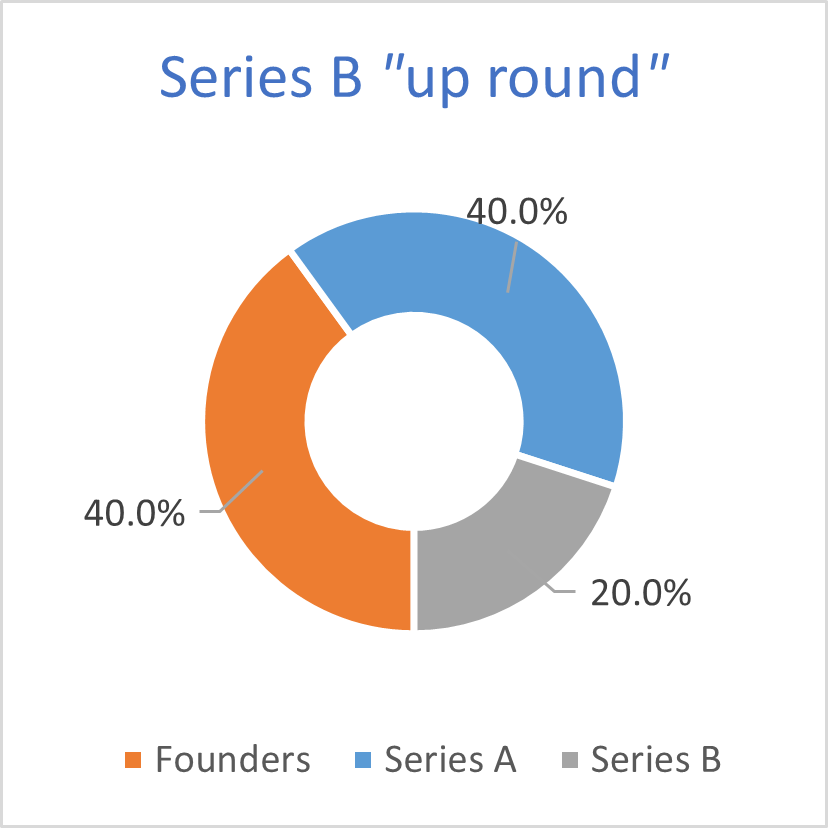 Figure 3 illustrates a $5,000,000 Series B “flat round”, with greater dilution to the existing stockholders. 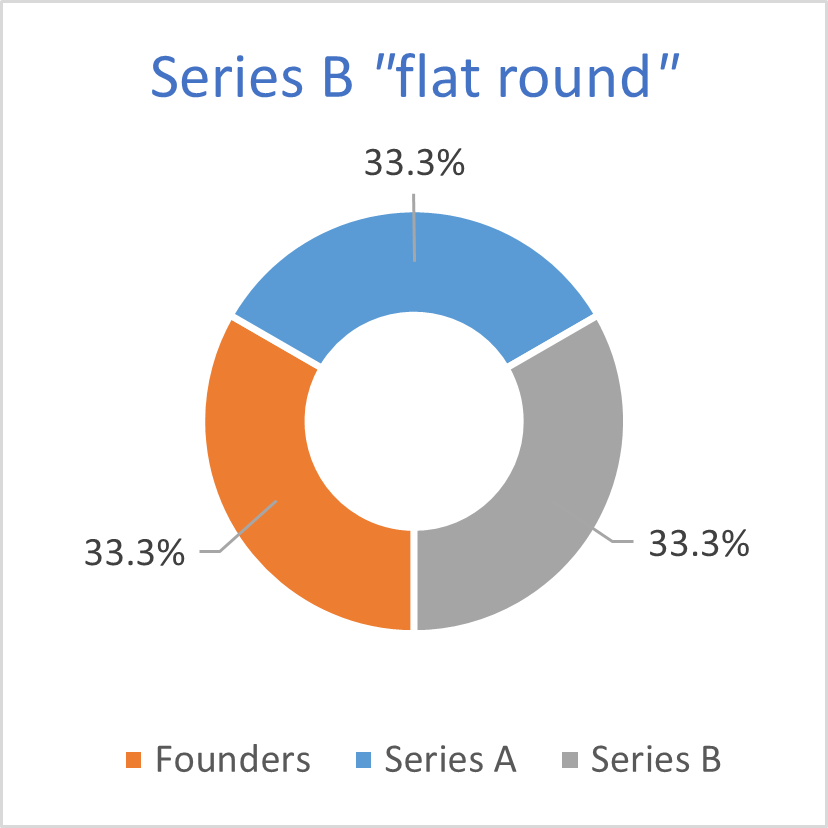 Finally, Figure 4 illustrates a $5,000,000 Series B “down round”, with the greatest dilutive impact on the current stockholders. 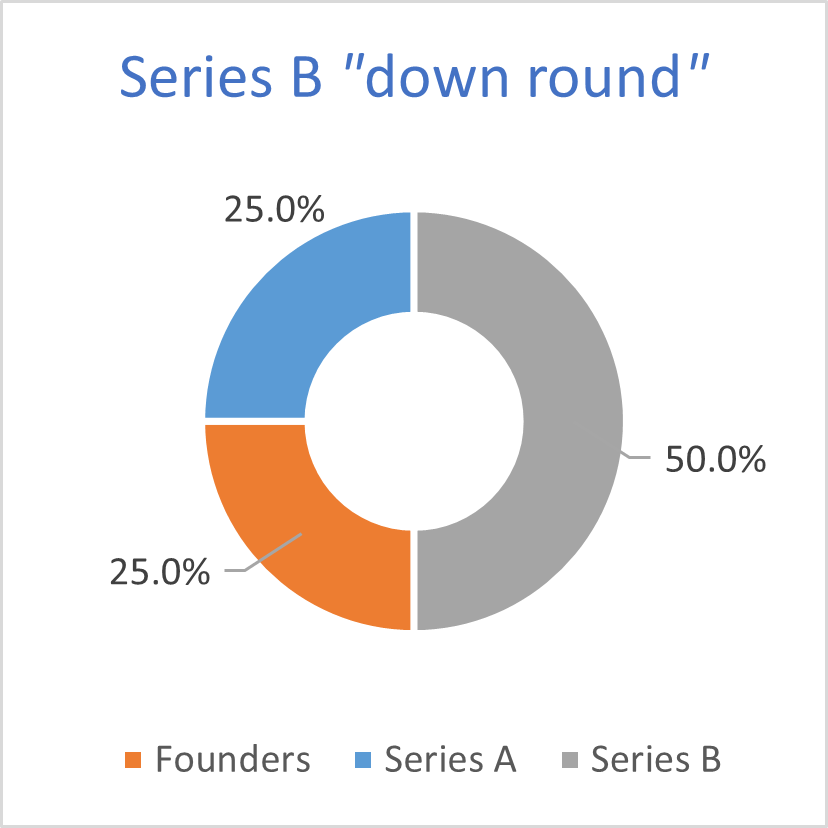 Because investing in a down round is viewed as being inherently riskier, investors in down rounds may insist on additional favorable terms such as (1) “full-ratchet” anti-dilution protections (see the Accelerate post “What is anti-dilution and why does it matter to me as a company founder.”), (2) more favorable liquidation preferences (greater than the typical 1x multiple), or (3) requiring existing preferred stockholders to convert to common so as to make the future realization of a liquidation preference more likely for the new investors. The founders should carefully consider the ramifications of these terms with their counsel.

Alternatives to a Down Round

Before raising a down round and in light of the harshly negative consequences discussed above, it is imperative that the company’s directors, lawyers, bankers, and other advisors carefully consider alternative strategies. These actions include:

Recommendations for Raising a Down Round

After considering alternatives, if the company still decides to proceed with a down round financing, it should take certain steps to avoid exposing the deal to excessive legal risks.

Although down rounds are undesirable and present many business and legal challenges, certain actions may alleviate the negative consequences. Down rounds can be psychologically damaging, so it is vital that all viable alternatives are considered and necessary steps taken to minimize liability exposure.